A couple of years ago I bought a 10-stop ND filter with the intention of taking a particular photograph I had in mind. I never got around to it, but lately I've seen a number of 10-stop photos by others that reignited my interest in trying out the 10-stop filter. I tried on a sunset a couple of nights ago, but the colors never popped, so the shots were disappointing. I tried again tonight and initially thought the same thing was going to happen, then I turned away from the sun and saw the clouds behind me were getting lit up much better than the sunset itself. The 10-stop takes a bit of work and time to take a shot, but I redid every thing and turned the camera around. Here is the result: 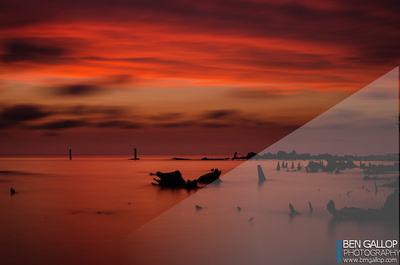 While that shot was going through 2-minutes of exposure, the clouds began to clear in the direction of the sunset. So, I turned back and setup again facing the Sun. Overall, I think these turned out pretty well for a first go with the 10-stop filter. I will definitely be using it more often.